Young people are fighting against engrained gender roles and gaining support and acceptance from a unique youth club in Banja Luka.

“Your place is in the kitchen!”, “Nothing happens until I say it does!”, “I’m a real man, and men don’t cry!”, “Don’t be weak!”, “It’s a man’s job; leave it at that!” Blue is masculine and pink is feminine. It’s known who is the stronger half and who is the prettier.

Although it is the 21st century, children often learn this mindset from an early age. And all these sentences and claims can fit together, brick upon brick, and create a wall – a great barrier, in fact, through which the Balkans can in no way get rid of such stereotypes.

In an attempt to combat the above-mentioned stereotypes, the “Be a Man Club” (Budi Muško Klub – BMK) was founded in 2008 in Banja Luka. It arose in response to the needs of young men who, in those years, needed support and a different approach to change their behaviors and to suppress – and even remove – ingrained stereotypes. The aim was to make a change and to point out the importance of different attitudes, but also to give young people the opportunity to express themselves. Some of them, such as Boris Risojevića, (20), became familiar with youth activism for the first time by joining the Club.

“[Joining the club] was itself an act equal to patriotism. It’s focus was directed from the inside to the outside – we tried to change the environment. It was here that I first became acquainted with youth activism. It was here that I realized that the state and the community will not be changed by the people, but by individuals. Individuals that are just being formed in organizations like BMK. In the next step, I realized how difficult it is to change something,” says Risojevića.

He continues, “because it is here that the Club provides a positive aspect of patriotism.” According to him, the Club teaches that “love for one’s own self is not exhibited by destroying someone else or by extremism toward the other, but by improving oneself, toward one’s own self.” He also admits that, before joining the Club, he was familiar with the organization’s workshops in high schools.

“They were more interesting to me than any professor,” Risojević added.

A prize winner in the fight against destructive attitudes

Milica Jovičić, project coordinator, “Perpetuum Mobile – Institute for Youth and Community Development” (of which the Be a Man Club is a part) believes that the critical phase in the development of boys in the Western Balkans is related to social and peer influences.

“Young men face violence every day, either as victims or as perpetrators. In addition, many have biased attitudes and behaviors regarding gender norms, which affect their relationships and expose them to a higher risk of unhealthy lifestyles. Unfortunately, this region still faces violence related to nationalism and politics, gender-based and homophobic violence, and violent behavior in schools. Patriarchal societies are strongly influenced by religious institutions. The political elite and the media continue to promote an unhealthy version of masculinity for young men – often with negative consequences for girls and women throughout the region,” Jovičić said.

She also points to the cooperation with all schools in Banja Luka, where they are implementing their educational program for the prevention of violence and the promotion of healthier lifestyles. The program was developed as a tool through the Youth Initiative by CARE International Balkans and other partners from the Western Balkans with a focus on gender inequality, harmful health practices and violence in the daily lives of boys and girls aged 14 to 19 in the schools and communities. The program covered topics for all four years of high school education, and in 2017, it received Global Education Ideas Award from Global Education Network Europe (GENE) for one of the 10 best manuals in Europe for non-formal education, Jovičić said proudly.

According to her, the program is realized in a way that the students and teachers dedicate 25% of class time to processing topics from the above-mentioned manual, which is designed as a tool. He says that workshops in accordance with this manual – in addition to those in schools – are also conducted at the meetings of the Be a Man Club.

How can they destroy the awful feeling of dullness?

Although it uses the term “man,” young girls are also part of the Club. Sanja Švraka (18), a peer educator, recalled her beginnings and how she became a member of the Club. As someone who lived in a small community, she admits, she “didn’t feel fulfilled.”

“I did everything that came to my mind. I drank with youth who were not of legal age, we smoked cigars and rode bicycles in the fields. Every young person I knew from that city had the same desire – to fill that hollowness and boredom via various material pleasures,” says Švraka.

The family decided that the best thing for her would be to move out and start living in a bigger city with many more options, she continues, because they thought she would “fit in easily.” They decided, in her name, which high school she would go to.

“The first year in Banja Luka was terrible for me. I had no friends. I did not get along with the professors. I would spend days in my room and not even go out to eat. And the hollowness in my soul was slowly turning into an existential crisis. My experiencing of every emotion and external influence was diminished by half. I was not interested in anything. I wanted to destroy that awful feeling of dullness. And that resulted in self-harm,” Švraka recalled.

Everything changed when, at the urging of a friend, she came to the Club, where her desire to help others was fulfilled. In time, she also became a peer educator.

“I couldn’t even believe that it had been two years since I joined the Club. I have participated in various campaigns and projects. I traveled a lot and gained new knowledge. I became a peer educator. I got the opportunity to give kids in high schools the attention and security I have longed for all my life. Finally, after so many years, I took advantage of that love of mine, helped others, and created for myself a routine that fulfilled me. I found real peace,” said Švraka.

The great power of youth clubs

Psychologist Saša Risojević points out that the period of adolescence is very important, because in those moments that mark the process of socialization above everything, “parents have a reduced position of influence, and certain groups or individuals take over.”

“If it is a group that exhibits risky behaviors, it can be expected that others, by joining the group, will be at increased risk of exhibiting the same risky behaviors, such as substance abuse, delinquency, peer violence and the like,” Risojević explains.

When it comes to the power of youth clubs, he states that they offer young people the acceptance, opportunity for self-actualization and the level of independence they need by creating interesting content and gathering groups of young people.

“Such an atmosphere is a fertile ground for young people to acquire the knowledge and skills necessary for leading a quality life through informal education and workshops. The Be a Man Club is one of the great examples of how to work on preventing violence, redefining stereotypical gender roles, promoting and adopting healthy lifestyles, and – ultimately – building a more tolerant and proactive society,” Risojević concluded.

BMK is part of a well-known program of the unique name “Young Men Initiative.” Activities from that program, divided into several phases, have been implemented since 2007.

Clubs exist everywhere in the region. They bring together more than 60,000 young people (boys and girls) in Bosnia and Herzegovina, Croatia, Serbia, Kosovo and Albania in cooperation with civil society organizations. As far as Bosnia and Herzegovina is concerned, the cities/municipalities with clubs include: Banja Luka, Sarajevo, Istočno Sarajevo, Mostar, Zenica, the Brčko District, Bijeljina, Tuzla, Travnik and Jablanica. All partners work as one. 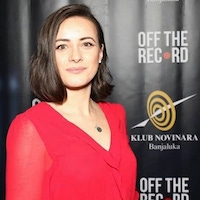 Brankica Smiljanić is a freelance journalist based in Bosnia and Hercegovina. She is covering gender equality topics, media literacy, youth right and life stories.

I received advice from a participant from Italy that the kind of Club I wrote about doesn't exist in that country. We wanted to have a single collaborative story, but due to the pandemic, we were not able to make it.