A surge of violence in the pandemic highlights Italy’s failure to protect victims of domestic abuse.

“Today, I still live in a sheltered house with my child, and I started working in an accounting firm as a trainee.” Giulia* – a 37-year-old, who graduated with a degree in Economics and worked illegally in a clothing store – lost her job at the beginning of March 2020. The same fate happened to her husband, a professional painter, who during the weeks of forced cohabitation, took out his exasperation through aggressiveness toward his wife. “The violence began well before the pandemic, but with the lockdown, my life became hell. He already had problems with alcohol, when he was drunk – and it happened often – he lost his temper, raised his hands, did not admit to having problems. During the weeks confined at home, I was always in the kitchen, our three-year-old girl in my arm, washing, cooking, cleaning. My ex-husband, instead, sat on the terrace, played with his cell phone and drank at least 12 beers every day, completely disinterested in our daughter. Everything fell on my shoulders. I couldn’t look at him – he disgusted me so much. I couldn’t take any more of his threats. ‘Look at you,’ I told him. ‘You’re always drunk. Get yourself right.’ He would say, ‘Slut. Whore. You are worth nothing. My ex had no children, but she was a better mother than you.’”

The ex-husband continued with the violence, not just verbal, and on 7 March, Giulia* ended up in a hospital with a bruise on her head. On 27 April, after yet another quarrel that ended with kicks and punches in the back, he called the ambulance, and a complaint for abuse was filed from the hospital. “Three patrols took me and my daughter to the anti-violence center. There, I took the opportunity to start a new life and slowly pursue my dreams, too.”

The story about Giulia* is common to many – too many – women who, during the last lockdown, found themselves having to live with violent husbands and companions, unable to leave the house, and having to turn to dedicated facilities to ask for help. Istat data on calls to the toll-free number 1522 against violence and stalking compare the situation experienced by women between March and June 2020 with the same period in 2019: after an initial drop in contacts (-53%) in the first three weeks of lockdown, the number of calls has more than doubled (+119.6%), and requests for help via chat have also increased exponentially (+539%), going from 417 in 2019 to 2,666 in 2020. In light of the new restrictions imposed by the COVID-19 pandemic, the date of 25 November – the World Day Against Violence Against Women – takes on an even more significant and urgent value this year, because it puts the draft of the new National Anti-Violence Plan on the agenda. The latest plan from 2017-2020 is about to expire, and the report “Between Rhetoric and Reality,” by the organization ActionAid, monitored state and regional funds (132 million euros in total) with the aim of suggesting times and needs for the elaboration of the new plan.

From the data obtained by cross-referencing budget documents and administrative documents from the Italian government and regions, updated until 15 October, a worrying scenario emerges: in the face of a two-year delay with which the national control room implemented the plan already approved by the Council of Ministers in mid-2017, the regions disbursed just 67% of the funds for 2017, 39% for 2018 and 10% for 2019, while the Department of Equal Opportunities has not yet allocated funds for 2020. In summary: Italy, contrary to what is hoped for by the 2011 Istanbul Convention on preventing and combatting violence against women (ratified by the Italian Parliament in 2013), does not yet have a system of interventions capable of affecting patriarchal culture and sexism that produces gender-based violence, and to provide adequate support to women who are victims of that culture.

Another example is Francesca*, 42, who for 13 years suffered abuse and requests for money from her ex, who threatened to take his own life in front of their two children. “He put his belt around his neck and would fumble with knives in front of them. He would say, ‘I won’t live without you.’ I could not react. He made me responsible for his life by keeping me tied to him, and I was forced to find the money for his debts between my savings and those of the children. In the end, he was convicted of fraud, but it was a bit of healthy selfishness that made me reborn. I reversed course, and today I look at the world from a new perspective – on my bicycle. Alone, or with my kids, I pedal for miles and I finally feel happy. When I think back to the policemen who took my complaint and responded, ‘Madam, who are you to tell this man that he must not go home?’, I ask myself: How long will women not be believed?”

According to ActionAid’s report, the resources from the 2017-2020 Plan have not been sufficient to cover all the actions foreseen by the Istanbul Convention, which should flow equally into four areas of intervention – Prevent, Protect, Pursue, Punish – according to the so-called “4P logic.” Most of the funds, in fact, went to Protection (83.9 million euros) for activities such as legal advice, financial assistance, housing and work for victims. A total of 5.5 million euros was allocated to Prevention (for activities such as awareness-raising, training of women workers and programs for abused men) and insufficient resources (67,000 euros) were allocated to activities related to Punishment and prosecution (aimed at improving the effectiveness of judicial proceedings, evaluation and rapid management of the risk of lethality and recidivism).

This is demonstrated by the story of Lorenza, 48 years old, who, among death threats, extortion and insults, when she fell ill with breast cancer, was denied even the most basic manifestation of support. “Die a bastard. Even cancer doesn’t want you,” screamed her former partner, a “collaborator of justice” who worked illegally as a bricklayer and had a gambling vice. “I’ve never stopped working, not even when I got sick,” Lorenza says. “It’s only that the disease opened my eyes wide to what was happening. There were two roads: to continue to be his ATM or to leave. When I had the courage to call the CAV [Center for Anti-Violence], I left a message on the answering machine. ‘I think I need help,’ I said, and I burst into tears.”

Lorenza’s* journey began just a year ago, when she left home and denounced the man who, however, continued to stalk her. “He was waiting for me outside work. He pretended to commit suicide by throwing himself on the windshield of a bus. One day, he lurked outside my son’s school screaming, ‘I swear to god I’ll kill you.’ In the end, he bargained, but out of the 13 months of imprisonment, he did only one day and ended up under house arrest because he was deemed incompatible with imprisonment. So I found him free, with no prohibitions from him approaching me.”

To protect herself, Lorenza* purchased a Televita – a small digital device usually hung around the neck and connected by phone to the national emergency number, 112 – pepper spray that she always keeps in her purse, she changed jobs and friendships, she doesn’t publish photos of herself on social networks, and she bought a house in front of the police barracks. But it served little purpose, because a few months ago, her ex found out where she works and lurked around outside her office. “‘Did he say or do something to you?’ the policeman asked me when I reported the incident. So, as long as he does nothing… and when he does? Though my story isn’t over yet, I can still look back and be proud of the steps I’ve taken. The road is long, not only for me but also for others. I think of neighbors, acquaintances, all those who are witnesses to violence and do not speak. You cannot turn away and pretend nothing has happened. Violence against women is not a private matter.”

The consequences of the unbalanced distribution of funds from the National Anti-Violence Plan are paid for by the CAVs – the Italian acronym for the Anti-Violence Support Centers – in addition to the women. The real drivers of the regional systems to combat violence have often been forced to suspend the salaries of the employees, to take advantage of voluntary work to ensure adequate support for the women they receive, or – as happened during the first lockdown in the face of the anxious response of the institutions – to implement yet another act of resilience. From the scarcity of masks and gloves (distributed only in very few cases by local institutions, such as in Brescia) to the inability to access tampons, the lack of adequate space for emergency reception remains the most urgent problem. Despite the circular sent in March by the Ministry of the Interior to the Prefectures to make alternative accommodations available, the centers – with the exception of those in Pavia – were forced to resort to bed & breakfasts or apartments made available by acquaintances and individuals.

“It is not possible for institutions to present themselves as being unprepared to face a new lockdown,” comments Isabella Orfano, an expert in the ActionAid Women’s Rights program. “The epidemic has given us many lessons that should not be forgotten. First of all, the essential role of CAVs in regional support for women, which have shown a great ability to adapt in reinventing a model of rapid response and intervention that cannot work if not adequately supported. It is necessary to get out of the emergency mindset in order to create a strong and durable system, at all levels, which works well in ordinary times and very well in extraordinary times. It would be unacceptable to waste precious time again.”

After the first pandemic wave in which the CAVs have endured with many difficulties, in the aftermath of new regional lockdowns, the risk is that these structures will reach the limit of their ability to survive, depriving women of a concrete way out of violence. The Minister for Equal Opportunities, Elena Bonetti, also stated the need for new funds to be allocated to CAVs and shelters, and in a recent online conference, promised a new national call for applications, through which 28 million euros would be distributed to the regions.

One of those who would count on the support offered by the CAVs is Erica*, 29 years old, who after five years of ordeals with social workers who “made me feel like Snow White’s stepmother,” turned to a CAV to obtain custody of her daughter. “He was easygoing and sociable, while I was shy and could never find the right words. During the interviews, he always won the upper hand, and the assistants questioned my parenting. ‘But don’t you trust him?’ they asked me as a provocation. ‘Would you trust those who punched you in the face and forced you to have sex?’ I said enough and went to the center, which referred me to a lawyer. They really helped me find the courage to face the situation. My ex was sentenced. I am among the lucky few to have won the battle against violence. But to file a report in order to seek justice, you often take punches to the stomach. It’s better to speak for yourself, to flourish. Because a life lived in violence is a life thrown away.”

names have been changed to protect the privacy of the interviewees 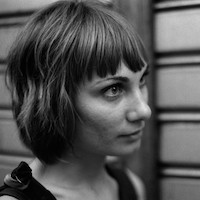 Linda Dorigo is an independent photojournalist and filmmaker. She has focused on Middle East region since 2009 combining social and anthropological reporting with the slow-photojournalism approach. She is now based in Italy working on gender-based violence themes.

Hostwriter is a strong network to build collaborations and share ideas beyond the borders. I personally had the chance to learn about interesting stories thanks to some partners I worked with, even if we didn’t manage to get a shared publication due to COVID-19 restrictions.
Published in Donna Moderna