With the work of human rights organizations regularly obstructed, with independent media under fire, and the courts filled with PiS loyalists, the ruling party in Poland has launched an ugly, multi-pronged culture war on the country’s LGBT+ community, in a bid to further polarize a divided society and ultimately maintain power.

This August, Linus Lewandowski was physically attacked by a group of strangers, simply for being gay. The 28-year-old software engineer and LGBTI rights activist was holding hands with his boyfriend, Rafal, as they made their way home to their downtown Warsaw apartment. “Then I heard someone say ‘fucking faggots’ behind my back, so I approached the group – and I got punched in the face,” Linus tells Equal Times. Despite being on the receiving end of daily insults, Rafal and Linus refuse to stop showing affection in public. “It is necessary that we hold hands,” Linus says defiantly. “If those people shout at us 30 times, they will eventually get tired, and they will not shout for the 31st time. We want people to know that we exist, and that we will not cease to exist.”

The rights of sexual minorities have been a lightning rod for toxic, right-wing ideologies in the Poland of the ruling, populist Law and Justice (PiS) party. Although it has attacked the rights of asylum seekers and women (as evidenced by the recent abortion ban) attempts to curtail the rights of gay, lesbian, bisexual, transgender and intersex people is cynically presented as the beating heart of a struggle to preserve the sanctity of the Catholic family – and Poland’s identity as a Catholic nation. With the work of human rights organizations regularly obstructed, with independent media under fire, and the courts filled with PiS loyalists, the ruling party has launched an ugly, multi-pronged culture war on Poland’s LGBT+ community, in a bid to further polarize a divided society and ultimately maintain power.

According to the 2020 Rainbow Map by the LGBTI rights watchdog ILGA-Europe, Poland is the most homophobic country in the European Union. There are only a handful of countries in Europe more generally that are considered worse, including Belarus and Russia. Members of Poland’s LGBTI community live in an increasingly hostile environment with attacks on their fundamental rights ranging from homophobic bigotry by prominent politicians, senior Catholic Church figures and the state media, to violations of the right to a private and family life: there is no legal recognition of same-sex couples, which prohibits everything from marriage to adoption to IVF treatment. There is no explicit legal protection against hate speech or hate crimes; only the Polish labor code prohibits discrimination on these grounds. A recent “Stop Paedophilia” bill, which criminalizes sex education and essentially links queerness to paedophilia, is currently being read by a parliamentary commission. And the growing presence of anti-LGBTI, anti-gender rights and far-right protesters has created an atmosphere that ILGA-Europe’s advocacy director recently described as “dangerous and unwelcoming.”

LGBTI people all over the EU still face an unacceptable amount of prejudice, intolerance and harassment according to a major survey published in May by the European Union Agency for Fundamental Rights (FRA). But Poland is one of the countries where the situation has badly deteriorated since the last survey took place in 2012. According to Krzysztof Śmiszek, an openly gay MP from the Left party and partner of the gay former presidential candidate Robert Biedroń, homophobia and transphobia has been encouraged by the government to manipulate society and create a moral panic around the supposed threat posed by “the LGBTI menace” on Polish families and Polish children. “The Law and Justice party is using a very old tool, known since antiquity, namely divide and rule,” he tells Equal Times. For Śmiszek, there isn’t anything intrinsically homophobic about Polish society. Indeed, same-sex activity has been legal in Poland since 1932, well before most other European countries. The current atmosphere is the result of pure political opportunism, he posits. “PiS probably conducted some research which indicated that some parts of society still do not know any LGBT persons,” he says, which makes it easier to turn this group into an “enemy of the people” to distract voters from other matters. “I believe there is no hatred in Polish society. There is only ignorance being turned into hatred. Ignorance, prejudice and stereotypes are stimulated, hatred is being inculcated… PiS is cynically and instrumentally dividing society.”

The situation in Poland has similarities with nearby Hungary, where mainstream right-wing politicians have made slanderous remarks about sexual minorities in the name of defending so-called “Christian values.” The Hungarian prime minister, Viktor Orbán, recently said that gay people should “leave our children alone” when asked his opinion about a children’s fairytale book containing a lesbian Snow Queen and a gender non-conforming deer. For Luca Dudits, communication officer at the Hungarian LGBTI rights NGO Háttér Society, the ruling Fidesz party treats the LGBTI community as “second-class citizens,” evidenced in the way it has “abolished legal gender recognition, promoted reparative therapy, refused to condemn attacks against the community, excluded same-sex couples from the definition of family, and used the community as scapegoats” since the party came to power in 2010.

In the previous FRA survey conducted in 2012, although one-third of LGBTI respondents from Poland complained about offensive language used by politicians, the public mood seemed less toxic. Progressive politicians such as Robert Biedroń and Anna Grodzka became Poland’s first ever gay and transgender lawmakers in 2011. Biedroń later became the first openly gay mayor of the northern Polish town of Słupsk. Not long after, in 2015, Poland lurched to the right with the election of PiS, which has been courting conservative voters by championing “traditional family values” ever since.

In the run up to last year’s parliamentary elections, the Archbishop of Krakow warned of a “rainbow plague” threatening Poland. The incumbent president Andrzej Duda won a second term this July, aided by his controversial “Family Charter.” As well as describing LGBTI rights as a “foreign ideology” that’s “more destructive” than communism, he pledged to prevent gay marriage or adoption, and promised to ban schools from teaching anything about homosexuality. In a TV debate, one of President Duda’s then aides (now education minister) Przemyslaw Czarnek, urged Poles to “defend ourselves against LGBT ideology,” claiming that “these people are not equal to normal people.”

In targeting the LGBTI community in order to win over older, conservative voters who are scared that “their beloved grandsons will be remade into granddaughters and vice versa, things got out of control,” explains Professor Antoni Dudek from Cardinal Stefan Wyszynski University in Warsaw. “The genie was let out of the bottle. Duda won [the election] but the genie is still here.”

Women have also been a target of PiS’s cultural crusades. In July, the government announced plans to quit the Istanbul Convention, a landmark treaty on violence against women. And in the midst of rising coronavirus rates, the government triggered the biggest protests since the fall of communist rule in 1989 when it announced an almost total ban on abortions. After almost two weeks of mass protests, on November 3, the government delayed the implementation of the controversial decision, which threatened to tighten what are already some of the strictest abortion laws in Europe.

Despite the government’s combative approach, the LGBTI community refuses to hide and retreat. By threatening them, Dudek argues, “LGBTI people have started organizing actions to make themselves more visible.” Last year, for example, a record 24 Gay Pride marches were held in Poland, including in PiS strongholds in the eastern cities of Białystok and Lublin, where marchers protected by riot police faced aggressive counter-protesters. In several cities, mayors attempted to ban the rallies, but their decisions were overturned by local courts.

In February 2019, Warsaw mayor Rafał Trzaskowski signed a 12-point LGBT+ rights declaration that sparked unprecedented backlash from PiS party leader Jarosław Kaczyński, the Roman Catholic Church and local governments, with 100 towns and municipalities declaring themselves free of “LGBT ideology” in response. “In 30 years of democracy, we [the LGBTI community] have never been in the political crosshairs like we were in 2019. And things are still bad,” says Bart Staszewski, a filmmaker and gay rights activist who posts “LGBT-free zone” signs in these areas that have declared themselves as “free from LGBT ideology.” When Poland sparked global outcry over the zones, 50 ambassadors and international representatives wrote an open letter in support of Poland’s LGBT community, while the EU cut funding to some of these areas.

The government’s response to this uproar has largely been one of indignation. But for members of the LGBTI community, the declaration of these zones has been a real source of anxiety. “We have been asked by people if they should move out or whether the municipality will prohibit them, as LGBT persons, from accessing services,” explains Milena Adamczewska-Stachura, a lawyer for the Commissioner for Human Rights. The office has filed complaints to administrative courts against nine municipalities for discrimination and violating the constitution. So far, four courts have annulled the anti-LGBTI declarations.

Just how far the Polish government will go in the curtailing of the rights of LGBTI people remains to be seen. Three women are currently standing trial and face up to two years in prison for “offending religious beliefs” after they put up posters depicting the Virgin Mary with a rainbow flag draped around her head and shoulders. A coalition of human rights organizations are calling on the prosecutor general to “drop the charges - and ensure that the three women are allowed to carry out their human rights work without harassment and reprisals by the authorities.”

And August 7 marked the start of what is being called “Poland’s Stonewall” after a wave of demonstrations was triggered in Poland and abroad after police in Warsaw detained 48 people, including Linus Lewandowski, for protesting against the detention of Margot, an activist from Stop Bzdurom (or Stop Bullshit in English) a radical, queer, feminist direct action group. Two months earlier, Margot had allegedly slashed the tires and assaulted the driver of a van advertising homophobic and transphobic slogans and messages that equated homosexuality with pedophilia. As supporters demonstrated against her arrest in August, they were shoved to the ground, in some cases choked and violently arrested. Some detainees say they were taken to police stations where they were stripped; in one case, a trans woman was forced to stand naked before a male officer. An Ombudsman’s office report released in September said that protesters had been subjected to degrading and inhuman treatment, raising serious questions about the behavior of the police.

“Liberal democracy is in deep crisis in Poland,” Professor Dudek admits. But LGBTI activists say they will not stop fighting for their rights. Although in many ways the situation has never been worse for sexual minorities in Poland, as Filip, a queer activist with Stop Bullshit says, this has been a year of real LGBTI pride “without hiding behind smiles and gadgets.” “Law and Justice claims to fight for ‘Poland first’, but we say ‘Polish queers first’.”

This article was supported by funding from Hostwriter. Edward J. Szekeres contributed to this article. 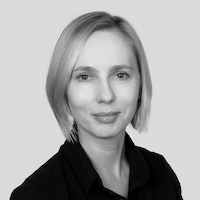 Marta Kucharska is a freelance journalist from Warsaw who reports on Polish political and social life to an international audience. Previously, she worked as a researcher and journalist at the foreign desk of the “Dziennik. Gazeta Prawna” daily.

Agora 2020 has been a great adventure to me. The subject I pitched was finally accepted by a media outlet. I received financial support that enabled me to enrich my article with a visual image. What I value most is that I took part in the forum for exchanging ideas, sharing knowledge and experiences.
Published in Equal Times