How Ukraine’s LGBT community has come face-to-face with homophobia during the COVID-19 pandemic.

Being LGBT in Ukraine is not forbidden. But same-sex marriages (or at least civil unions) are not allowed by Ukrainian law, yearly Pride parades are accompanied by armed protesters, and even going outside with a rainbow symbol can sometimes expose you to violence. Ukrainian homophobia is flourishing and, unfortunately, the coronavirus pandemic only contributes to this.

To find out exactly how, I spoke with representatives of the largest LGBT organizations in Ukraine and talked to some individuals about their experience in lockdown as an LGBT person.

Homophobia at the public level

Konstantin Andreev, a representative of the “Gender Zed” Charitable Foundation and member of the “ZaporizhiaPride 2020” Organizing Committee, explained the context. “In Ukraine, the LGBT community faces homophobia and transphobia, first of all, at the state level – in the legislation. Ukrainian LGBT people cannot marry or register a partnership. Because of this, they do not have the right to joint ownership, upbringing of children or social security.”

Andreev added, “Homophobia at the state level is closely linked to social homophobia. This can be seen in myths and stereotypes. For example, we often hear that LGBT people should not raise children, because they are allegedly corrupting them, or if same-sex marriages are allowed in the country, they will soon all become gay and lesbian, although these prejudices are easily broken by statistics.”

Ruslana Panukhnyk, Executive Director of the NGO “KyivPride”, provided her perspective. “‘Explicit’ homophobia comes mostly from right-wing radicals and sometimes from the media. For example, in June of this year on the CRT channel there was a TV show with an interactive poll ‘Same-sex relationships – debauchery or mental illness?’ The organizers of the program did not give other options.” She continued, “In many other situations, homophobia is more vague, but also understandable. For example, we are sometimes denied rental space for events, advertising, and so on. No one says it’s ‘because you’re gay,’ but negotiations go on until we name our organization or say the topic of the event.”

According to psychologist Gordon Allport, there are five levels at which a majority can discriminate against a minority. The first level is harassment or jokes. The second is ignoring. The third is discrimination at the legal level. At the fourth and fifth levels, there is violence and destruction.

“In Ukrainian society, homophobia exists on four levels,” says Andreev. “Sometimes it comes to the fifth, but it’s hard to follow, because attacks based on homophobia or transphobia are often not documented as discrimination, but translated into hooliganism.” Fortunately, this is not the case with all events.

Statistics on illegal actions committed on the basis of homophobia or transphobia are collected by the LGBT Human Rights Center “OUR WORLD”. In September 2020, the Center published a report for January-August 2020 – it also captured the quarantine period. The document noted that due to the restrictions on mass events and personal meetings since March this year, the number of illegal actions has decreased.

In total, 106 cases of homophobia and transphobia, discrimination and other violations of LGBT rights in Ukraine were registered from January to August. For comparison, in 2019, 369 such cases were documented.

Ruslana Panukhnyk, Executive Director of the NGO KyivPride, said, “Aggressive homophobic behavior exists in response to appearances. Less visibility – fewer attacks. But for us, visibility is one of the key goals of our activity. And this year, we did not have the Equality March or many other offline events. We’ve moved some online, but online visibility isn’t much. Although it also causes homophobia. When we launched a rainbow-flagged drone on June 21, the day KyivPride was due to take place, a lot of hatred flew back at us.”

In some cases, COVID did not reduce the number of grounds for discrimination, but became one. Thus, at the beginning of the pandemic, the Patriarch of the Ukrainian Orthodox Church of the Kyiv Patriarchate Filaret said in an interview with Channel 4 that the coronavirus began because of same-sex marriages.

Taisiya Gerasimova, Information Coordinator of NGO Insight, explained how the organization reacted. “NGO Insight sued Patriarch Filaret for this statement. Because it is very serious. He is an authority in his field and religious people will be able to believe this information. The lawsuit was not initially accepted, then classified as insignificant (they did not accept the parties for consideration). Lawyers are now working to get the case back on track. There are a lot of homophobic comments on Facebook about the case.”

The application was filed in April 2020. As of the writing of this article (October 2020) there is no news about this case. In September, it became known that Patriarch Filaret himself contracted the coronavirus. The patriarch has already recovered.

A separate problem is the difficulty, almost impossibility, of tracing homophobia in personal life. Attacks can be counted, even public statements can be recorded, but what happens behind closed doors is not.

Many Ukrainian women and men live with homophobic parents and have nowhere to go during the pandemic.

A gay woman who wishes to remain anonymous recounted her story. “I started dating my girlfriend four years ago. For all four years, we met secretly from my mother, who has a very bad perception of same-sex relationships. Now I study in another city, and my girlfriend and I live together in an apartment, and I tell my mother that I live in a dormitory. But because of the quarantine, I had to return home. My mother, without our knowledge, read our correspondence and learned everything.”

She added, “There was a big scandal, tears. She told me that I was ‘abnormal’ and ‘it would be better to be a drug addict, because it is at least treatable,’ and threatened to withdraw me from school. It’s good that at least she didn’t say anything to my father, because it would be life-threatening,” (at this point, the woman laughs bitterly).

The quarantine created additional hardships with her mother. “I tried to find a job to be less at home and better equipped to move, but due to quarantine I did not succeed. Then there were different periods: she sometimes ignored this news, sometimes cried, sometimes forbade me to see a girl at all. At one point she invited me to talk, I told her that it was all serious, that we were together for four years, hoping that I would be accepted. In response, she was silent for three days, and on the third she said ‘No. I will not accept this, you are just spoiled, so break up with her.’ I decided not to stand my ground and continue to live in secret, so I told my mom that I and my girl are no longer together. Now my mom pretends that nothing happened.”

This period directly coincided with the quarantine. She said, “This whole story lasted two weeks. Two weeks of scandals and constant psychological stress, from which there was nowhere to go – because it was just a period of strict quarantine. My mother’s words hurt me a lot: I didn’t start to think I was crazy, I didn’t have any problems accepting myself, but these statements are still in my head. I don’t understand how my mother could say that about me. It’s hard for me to even be with her now.”

She added that “everything is not so bad,” “it could have been worse,” and that it was just “hard.” This attitude was similar to another woman who recounted own story. When she wrote, she was not even sure whether her situation was worth paying attention to. She said, “In quarantine, my first relationship with a girl began and I realized that I was bisexual. I live with my parents and my mother is homophobic, so I didn’t tell her anything. But it so happened that it was during this period that my mother (she is interested in astrology) somewhere in my astrological charts saw that now I have a tendency to be LGBT. After that, she did not talk to me for almost 3 weeks.”

She continued, “Then my mother and I started talking, but throughout my relationship (2.5 months) I was constantly arguing about whether non-traditional orientation was normal. My mother often told me that she knew everything and could not forgive it. I don`t know whether she really knew it or just guessed because of the horoscope. One day, my girlfriend decided that she wanted to separate, and the same day, my mother decided to talk again about my ‘bad’ orientation. During this conversation, I cried in tears and hysteria: ‘Why these conversations, if I no longer have a girlfriend?’ My mother replied that ‘it is for the better, now you are normal and everything is fine.’”

The woman said that her mother is still homophobic, but she no longer mentions this situation. “I think if we hadn’t been in quarantine together for so long, the conflict would have been much easier for everyone.”

It is unknown how many more such bisexuals, lesbians, gays, trans persons and anyone who identifies as part of the LGBT community have faced homophobia in their personal spaces. Their stories are unheard, but important.

In public life, examples of homophobia have decreased due to quarantine in the country, but homophobia itself has not gone anywhere, it is just hidden in the online and personal spaces, so we cannot say that its level has decreased. But we can say that COVID has become another factor in its development: both in the situation with Patriarch Filaret, when the LGBT community was accused of spreading the Coronavirus, and in the personal situations of those LGBT members who were quarantined in a confined space with homophobic relatives. Many of them had to face rejection of their identity by their families.

This kind of homophobia is even more hurtful than insults by random strangers and it can have a stronger effect on the psychological state. According to Ukrainian LGBT-friendly psychologist Marharyta Onopriienko, people who face familial rejection can often have a feeling of guilt for their “incorrectness,” which can require long-term therapy in future. 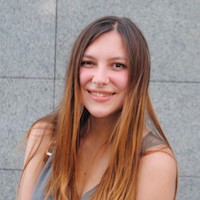 Viktoriia is an emerging freelance journalist from Ukraine. She is most interested in LGBTQ+ topics and covers the personal stories of the LGBTQ+ representatives.

My greatest benefit of this project was the unique practical experience of being a part of the international team. I have cooperated only with local media before, so it was very inspiring and essential to present my piece of work here and face-to-face with the world standards of journalism.